Yes, my people, as the title implies we have all that to talk about, and more. 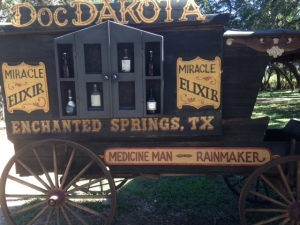 We had a good ol’ fashioned day of Western Themed Entertainment. We arrived expecting a massive crowd and were surprised to be only a part of a small group.

We of course took tons of pictures of the themed old west town, talked to a buffalo who never came near us and went on a covered wagon ride, pulled by a tractor by a young fella dressed like the towns marshal.

On the wagon ride there were antelope, zebra, deer, long horn cattle, Emu, turtles and some huge catfish.

We all got to hang out with their super mellow bull, and get pics with him. I forgot his name but am sure it begins with a “B”.

After the ride we watched a show by Pistol Packin Paula, the one and only female two-time world champion gun spinner.  She twirls two real .45 Cimarron’s and handles bullwhips like she’s a super hero with lightening in her hands. 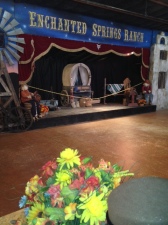 Thankfully she’s good at what she does because she pulled Mitch out of the crowd and had him hold onto a piece of Styrofoam and broke it with the whip. 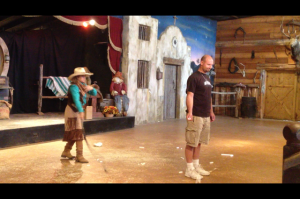 He thought she had her eyes covered the whole time, but she took the handkerchief off her eyes when she actually hit it out of his hand.

She didn’t even know that  Tuesday was his 45th Birthday.  I don’t know why I keep telling him he is halfway to 90, probably because I’m amazed at how fast time goes, and that soon I will be half way to 80. Eeeks.

For Mitch’s Birthday we went to Dave and Buster’s with Greg and Amy.  Mitch was so happy with his steak, he considered getting another one when we ordered Papa’s to take home to him. We played some games and Mitch got a T-shirt and a huge ashtray with the winnings. Amy described Dave and Buster’s the best when she said it’s like an adult Chucky Cheese.If you’ve never gone it’s where you can drink alcohol and win more than a sticky finger, stuffed animal or a laffy taffy.  Shoot, if you have enough points you can get a waffle maker or a blender.

Mitch decided he wanted chocolate cake with chocolate frosting for the big 45.  At first we were contemplating making a cake and then realized it wouldn’t fit in the oven.  So we decided on cupcakes.  It was the first time either one of us had ever made cupcakes.  Seriously!  They turned out great.

One thing we’ve learned is with a smaller oven is it takes a lot less time to cook, so we take the recommended cook time, cut it in half and then check it often.  We have also taken on making recipes on the back of boxes that we always wanted to try and just never made time to do.  It has been awesome. Another big step for us has been making a list of the dinners we want for the  upcoming week, see what we need and actually just shop for those items.  That’s a huge change for us.  We used to just get things willy nilly, and then figure out what to make.  I have really enjoying this new way dinning.  It’s a lot less stressful than trying to figure out dinner when you’re already hungry and it’s getting late.

We have upgraded a couple of our light fixtures to LED.  They are an investment of money for sure, but definitely worthwhile.  One of our lights got so hot, it melted the switch and then burnt out the bulbs.  Once we started looking we realized another one was on the verge of a melt down.  The other light that had to go was the one above the stove.  Anytime we were cooking, we would have to get the flashlight out to see if the meat was done, no kidding! It’s like night a day, pun intended.

Friday night we partook of the events in the RV park and played Bingo.  Papa and I each won $5, and Mitch keeps his streak of never ever winning a single game of bingo in his life.

5 thoughts on “Bulls, Busters, and Baking”