We were blessed with a warmer than usual fall season, just going through our days thinking we wouldn’t have much snow for the winter and boom, it started SNOWING, and snowing and snowing!

Not exchanging gifts this year was a simple decision, especially since we spoiled ourselves a couple months ago and upgraded our phones. 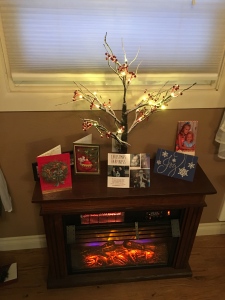 We started a new Christmas tradition and waited until Christmas morning to open all the Christmas cards, passed them around while we drank our coffee and ate some delicious pumpkin bread from a wonderfully thoughtful customer from my Four Lakes Post Office.

My new job at Four Lakes has been great so far, the community’s been very welcoming and patient as I learn the ropes.

I decorated for the holiday’s at the office, they say it hasn’t been done for decades.

The latest news on the house…we’ve started to make visible progress on the house.  Painting, putting up some trim,  it’s just a matter of having time and energy to get’er done.  Here’s the yeller feller at night, inside the kitchen through the sliding glass doors is my sweetie pie cutting some half round after he plugged in the Christmas lights that’ve been on Mac’s ol tree for all the years we’ve known him. 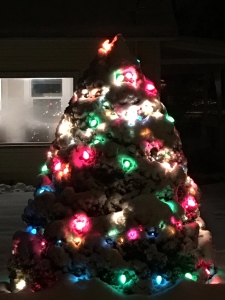 We did get the dogs Christmas hats, just so they could be a part of the celebrations.

We even had Turkey for dinner, thanks to Mitch winning one at Turkey Bingo last week!  BIG HINT about cooking the bird we learned last week,  after taking it out of the oven, let it rest for at least 30 minutes before cutting into it, that way it soaks up all the juices and won’t be dry!!

Now, onto me explaining how I came up with the title for this post.  It all began Tuesday the 22nd of December.  It had once again snowed, Mitch had already left for work and his morning of shoveling. I headed out to leave when I see that the darn snow plow blocked Fancy in.  It wasn’t the soft fluffy snow that first came down, it’d become packed, wet from freezing rain and solid as a rock.  I took a picture just to show my progress after moving half of it, thinking that I’d at least I got my hard knocks out of the way early in the day.

I decided to do a bit of maneuvering, pulling forward and turning a little, then pulling forward and turning a bit more until I could get out.  The odd thing was when I went to start fancy, the steering wheel was locked, and it wouldn’t start until I turned the wheel, which she’d never done before.  Finding it a bit odd, I think to myself, well that’s perplexing, hope that’s all my troubles for the day.

After work I needed to make a couple stops, while pulling up to a stop sign, my check engine light came on, then some code came up and fancy began to sputter.  I decided to stop by the hardware store, maybe I just needed a little oil. Since it’s a VW it requires certain oil, I call my mechanic, tell him what was happening and he said,”Don’t even try and drive it, that could do a lot more damage”.  So thankfully I had AAA

The results, bad news! There’s no compression in the 3rd cylinder and the cost to repair it ranges from $2,000 to $5,000! Now I’ve already paid a good amount of money to get a few things fixed in the last year and half I’ve had her.  Still having to get to work that day, my friend Felicity gave me a ride.  I suggested we go a different route thinking it may be a little faster and I would  get there on time.  And then…..

Not only did it make me late for work, but it made her late for work as well. Tough day. Could’ve been worse. It could always be worse. Now what to do?  I got a second opinion, and decided based on the cost of all the repairs I’ve already done, how expensive it is to fix anything, let alone the price of just an oil change I am going to say goodbye to all the bells and whistles of fancy. So long sun roof, all wheel drive and my heated seats, but honestly I never could figure out the wipers, which way to push the switches, and the power.. seriously that girl could jump off a curb standing still.  I think it was just more car than I’m designed to have, hopefully her future home will be just right for someone. Future trade in here I come.  I already have one picked out, but I don’t sign papers till tomorrow so it’s not officially official.

Everything happens for a reason, this is just a tough time season.  Our renters and friends across the street are planning to leave in the spring, we still don’t have anyone lined up for the yeller feller and just the other day I took a nap on the couch, charlie came over to give me some love, knocked my glasses on the ground with his big ol tail.  Not realizing it, I get up to go to the kitchen and crunch, I stepped on them and they broke.  So we say hello.. hello.. hello..from this valley we are experiencing in life, and know that someday we will be sharing our peaks.  That’s the great thing about life, can’t have peaks without valleys!

Pops has been more forgetful lately, the doctor says it from his mini strokes he had a couple years ago, and so when I went over to his place to get a plate for dinner I couldn’t help but laugh when this is what I found.  Yes, that is a piece of pumpkin pie that I gave him the night before, just sitting in the dishes drawer.

6 thoughts on “Jingle Bells and Whistles”