Skip to content
It all began when we first arrived on the BLM land of boondockertunity.
Let me tell you, there has been one gals website that I’ve been following since the day we decided to travel. Her writing style, the beautiful pictures she takes, the vast knowledge and insight that she’s provided for full time RV travels is awesome and invaluable.  She’s become somewhat of a role model, a person with skills that I’ve come to admire and look up to.
It was just by chance, and to my overjoyed excitement that she and her husband were boondocking here in Yuma when we arrived.  I was really looking forward to meeting them, bought a bottle of wine and sent her a comment through her website saying I would love to meet her and say thanks. A day later, after much anticipation she finally replied, and basically said, “busy for the rest of time we’re here with friends and appointments, but if we’re outside you can come by.”
It was to my utter surprise that she didn’t come running over and give me big hugs and proclaim her admiration of me too. I joke! I was thankful that she replied and was open to the idea of having strangers come visit. But what she posted on her website that same night made it clear that she wanted privacy and space.
That night, I pondered all my options, wrote and re-wrote a response to her about being in her “boondocking bubble” and being one of the 5 RV’s that was in the vicinity, but in the end I decided not to write anything. Honestly, my feelings were hurt, I felt rejected and all that hope I had for months about someday maybe meeting her, was tainted.  My thoughts of the experience left me feeling sad and insignificant.

Then, the most amazing thing happened. I stopped thinking about how I felt and tried to understand her perspective.
She’s become somewhat of a star in the RV world, with a thousand plus followers, all of which, when I started to read comments want to meet her. It’s not like she knew me, it really wasn’t about me at all, it was her situation and how she was feeling. After some real soul searching I realized that it was her loss, it wasn’t meant to be and darn it, I really like me.And from that rejection came a replenished sense of self love and acceptance that I really needed.  I had such a peaceful night’s sleep that night.
It’s as if she had just done me a huge favor and reminded me that I am enough without knowing her. I prayed about it and left it to fate.

We moved spots a couple days later and never met. In the end, not getting to knowing her, helped me to get to know myself better!
The couple we bought our trailer from had been on Mitch’s mind lately and so a few days ago he sent them a text seeing how they were doing.  As fate would have it, they were in Yuma visiting friends. That afternoon Tom & Vicki came out for a visit. We had a great time catching up with them and spending time with such quality people.  As we visited, Vicki asked me what books I’d been reading (because I had made a statement when we bought the trailer about wanting to read more).
“Not a darn one, and I couldn’t tell you why” I replied. After they had left, I said to Mitch, ” how funny is it that we have all these books and haven’t read a one?” The next day, we pulled out a few books and started to read. Mitch read “To Heaven and Back” by Mary C. Neil, MD and is in the middle of “I Dare You to Change”.  I’ve read “I Dare You to Change”, written by Bil Cornelius, “Talking to Yourself Learning the Language of Self-Affirmation”, by Pamela E. Butler  and a book I picked up for Mitch’s Son Elijah “The 7 Habits of Highly Successful Teens” by Sean Covey.   As you can tell by the titles, it’s been a bit of a self help week, and boy has it helped. Thanks Vicki for reminding us that we had all these books to read!
I took a long walk last week, went to a mountain top, sat down and meditated…. For a minute. Then a fly landed on me, I tried to re-direct myself to only focus on my breathing and then it landed on me again, so I called it good for the day.
We went to Los Algodones, Mexico on Friday the 24th of January. No problem getting in, a long line to get out and talk about pressuring sales tactics! I caved in on buying a few things just because its so fun to get them down in price. You can really only get that kind of fun banter in Mexico now a days. But also, the constant bombardment gets annoying very quickly. 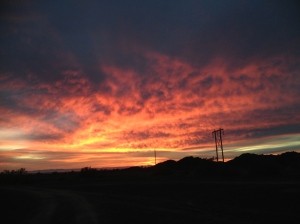 After a while, since they felt they had something that I needed, I knew that I too had what they needed.  So as each one came up to me, I would say “no thank you, Jesus loves you” and give them a huge smile. It was really interesting to see their reaction, most just looked at me with wonderment and then would go back to trying to sell me wherever they had.
Our goal of 14 days without dumping didn’t happen.  We ended up going into town and dumping twice and moving to different spots each time, which in the end was really cool because we got to experience more of the land that way.

At our last spot a couple days before we left for Lancaster, CA, we came up with a really fun game we titled “Rock Wars”.  We dug shallow spots in the ground, gave point value to difficulty and distance and would play to fifteen.
In the end, on our last game, the winner would be titled Rock War King, the winner was Papa!!!!  Since we have been traveling, with all the places we have been and seen, playing this simple game was one of the best times we’ve had together!

2 thoughts on “Self Discovery in the Desert”